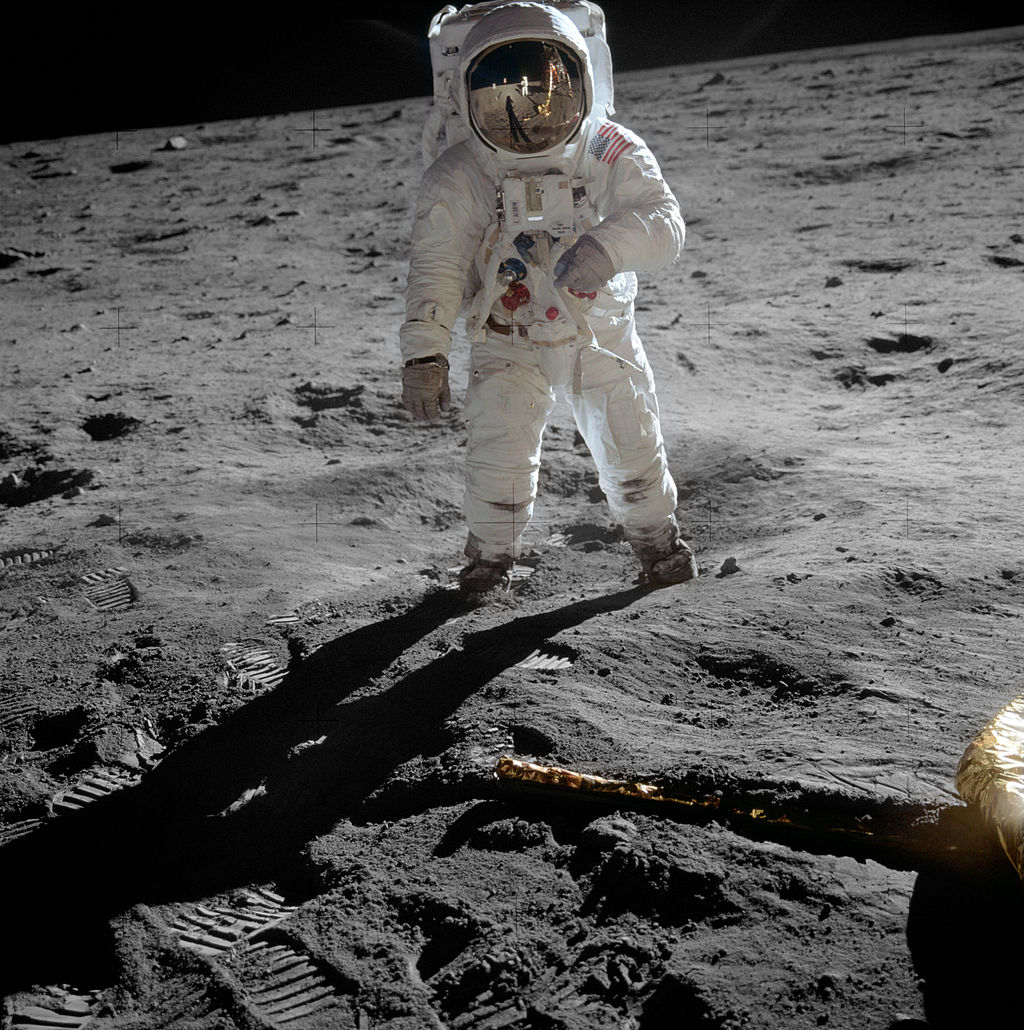 Buzz Aldrin on the moon, Neil Armstrong visible in the reflection on his helmet shield.

On this day in 1969 human beings landed on the moon for the first time.

I've just posted another item on the 1960s that has a much less celebratory tone to it. This achievement, and it was indeed that, really stands out as the best of the 1960s.

It still stands for that.

I'm old enough to have a personal recollection of this event.  I was six years old at the time.  My recollection has come to be that mother turned the television on at home, something that was almost never done during the day prior to my father coming home from work, save for her daily viewing of Days Of Our Lives, so that we could watch it on our black and white Zenith television.

But that recollection is off.  The first moon landing occurred at 10:56 p.m, which would have been very late at night where I lived.  We must have watched it on the television that next morning.

And so we did.

It was amazing even then. And as a small kid at that time, we all were fascinated by the moon landing. But then so were adults.  It was a big deal, and we knew it was.  Some of us had astronaut toys at the time.  For awhile, I had a pennant that a friend of my mothers brought back as a gift from the Houston NASA facility.  It was an achievement that stood apart.

Of course, it was one that we'd been headed towards for some time, which is worth remembering.  Endeavors just don't happen, they have to be worked on.  That rocket technology might take us to the Moon, and beyond, was obvious as soon as they became something serious in the early Twentieth Century.  Rocket technology really received a boost, however, due to World War Two, as explored in this blog entry here:


And after the war, the weapons capacity of rocketry kept development going, as is well known.

But none of that had to lead to space exploration.  Mankind simply decided that it would.

And it perhaps there's a lesson for us here.  This took place in the Cold War, with the Cold War constantly in the background. That a greater goal would be developed in that background surely means the big problems of today, especially that present scientific and technological challenges, can be handled now.

Wonderful post! I was a very little girl in 1969, but I still remember the turmoil - and I remember the wonder of sitting in front of my parents' black & white Zenith and watching Neil Armstrong take his "one small step."