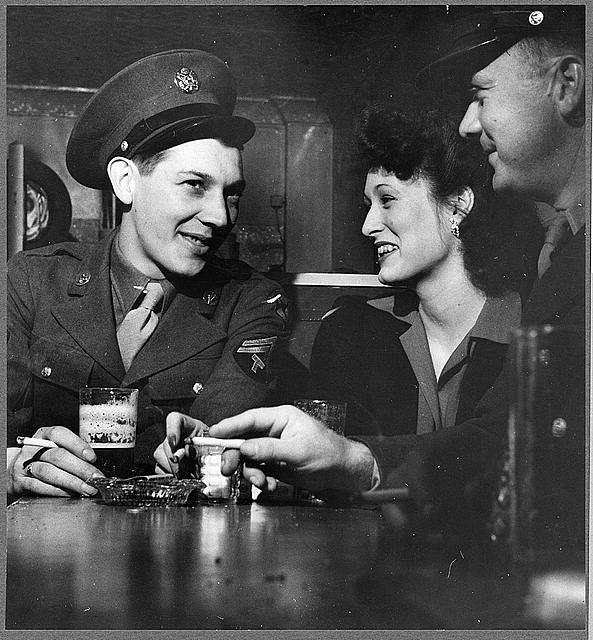 Patrons of a bar and grill in Washington D.C. in 1943.  The man on the left is drinking a glass of beer, and it appears the woman is as well.  Also, fwiw, the man on the left is a Technician with a Corporal's grade, which during World War Two was an E3 grade, as opposed to Specialist and Corporals today, which hold an E4 grade.  The man on the right is an officer, so this is frankly likely a posed photograph.  All three people are smoking cigarettes.

Beer can, perhaps, be regarded as the American alcoholic beverage of choice, reflecting both the climate and geography of the nation, as well as the English founding of the country.  While not to put too fine of point on it, the English were armed Germanic immigrants in the 5th Century and some cultural things go way back.  Everywhere north of some line in modern France, if you consider Western Europe, beer is the alcoholic beverage.  South of that, it's wine.  All the Mediterranean people of the ancient world drank wine and in those areas of that region which are not now Islamic, they still do.  North of that line, at some point, they drank beer, although you can easily find beers going back to the ancient Egypt as well, although frankly the Egyptian climate was somewhat different at the time.

In the Medieval world, north of the beer line, beer was a staple.  South of it, wine was.  This isn't necessarily good, but basically the ills associated with any sort of alcohol were lower than those associated with plain water.  I'm not going to go into that, as its a bit more complicated than it might seem, but that's the case.

Before I move on. . . yes, there's hard alcohol and every region of the globe seems to produce some.  Whiskey is a Celtic thing and it goes way back in its own right.  But there are few people and were few people who simply drink hard alcohol routinely in the Western world, and in those regions were it is routinely consumed, it's destructive.  So, with that, we'll move on.

In the early Colonial era there was no big temperance movement of a wide societal basis.  Indeed, one of the oddities of history is that religious denominations that today argue against alcohol and which trace their origin to the Puritans, and not all make that trace, don't reflect back what the Puritans believed at all.  The Puritans were against a lot of things, to be sure, but they were fans of beer (and [marital] sex), so people remember them inaccurately.  But one did start to arise in North America by the mid 1700s in the form of Native American groups who urged it given the devastation that alcohol was causing in their cultures.  Indeed, they'd organized a temperance organization as early as 1737.  Coupled with this the popularity of gin in the early Industrial Revolution in the United Kingdom, which was a gross booze which could be manufactured cheaply, caused the movement to come about there as well.

The early United States, however, was simply awash with alcohol and this, over time, gave force to the temperance movement, and by the mid 19th Century it was growing strong.

Issuing an alcohol ration is a strong military tradition in many armies, but reflecting the unique history of alcohol in the US, the tradition is much weaker in the U.S.  The American Navy, following the tradition of the Royal Navy, issued a Rum Ration, with Rum simply being any available hard alcohol, but in 1862 it abolished it.  In 1914, during the era in which Prohibition was coming on strong, the Secretary of the Navy Josephus Daniels completely banned alcohol in ships, meaning that the U.S. Navy went into World War One escort duties dry.

The Army had an alcohol ration very early on.  Starting in 1775 Congress authorized soldiers an alcohol ration, and the ration was whiskey, in part reflecting a disruption of alcohol constituents that had been imported.  The is ration continued until 1832.  There was a separate spirts ration for military surveyors that continued on until the 1840s, but then it was also discontinued.

Since that time I don't know that there's ever been an alcohol ration in any branch of the military.  Indeed, the British discontinued their famous naval rum ration in the 1970s, so its likely disappeared or much less what it was everywhere.  The problem of obtaining clean water isn't what it once was, and its never been as big of problem in North America.  From the 1830s on soldiers could buy beer at post suttlers stores, but they were restricted in the amount they could buy.  I can't recall the restriction, but it was far below the amount you could drink and get drunk, which no doubt was the goal.  Of course, off base you could buy as much of anything as you might wish to, which is partially why saloons were a feature of every location with a frontier post.  Indeed, it was noted in the 19th Century that one of the problems of not having something like an Enlisted Man's Club, such as was later done, is that off post saloons were real dens of vice of all sorts.  Apparently this wasn't enough to motivate a change, but it was noted.  No alcohol ration was provided at any point through Prohibition.

This brings us to World War Two and this interesting item below, by Gary Gillman, a Toronto based beer blogger with an excellent blog entitled Beer, Et Seq.

I frankly don't know what was done beer wise from our point of entering the Second World War up through the end of the Vietnam War.  What is clear is that beer seems to have been provided on at least an ad hoc basis and therefore was a type of ration, even if on a somewhat informal basis.  Cigarettes had become one too, which had not been the case in World War One. The though likely was that you simply couldn't have that many people in uniform and not address such things, least they be addressed by the men themselves, which of course they also did.  Beer seems to have been provided on some basis in the Korean War and the Vietnam War as well, but not since then.  Indeed, recent wars in Islamic countries have been "dry", so to speak.
Anyhow, and interesting look at the US actually undertaking to brew beer during World War Two for servicemen's consumption.
Posted by Pat, Marcus & Alexis at 07:47

Excellent notes. Just one small point, but some have argued there is a cider belt, in places, between the wine and beer regions. Say in Brittany, or around Frankfurt.

Thanks! I was completely unaware of the cider belt. I'll have to look that up.

So, circling back to our focus, timewise, in 1916, when troops were being called up and deployed for the Punitive Expedition (was Lex Anteinternet: The Military and Alcohol. U.S. Army Beer 1943-1946). .