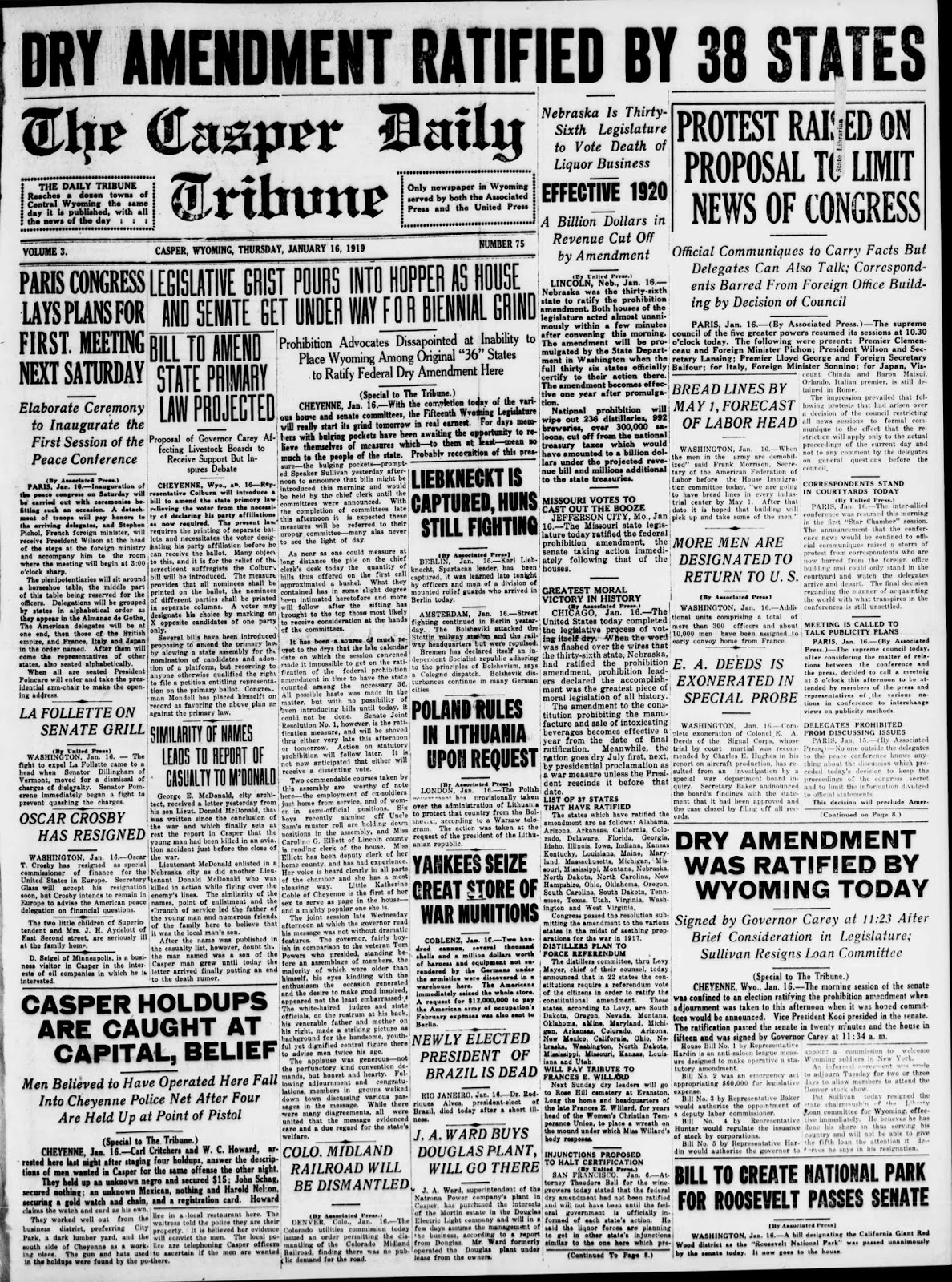 On this day in 1919, Wyoming, in combination with North Carolina, Utah, Nebraska and Missouri ratified the 18th Amendment to the United States Constitution.  These legislative acts secured a sufficient number of votes to make the 18th Amendment the law. The Senate had passed the original proposal on August 1, 1917 and the House a revised variant on December 17, 1917.  The various states passed it in the following order:
Connecticut and Rhode Island told Congress to pound dry sand and didn't ratify the amendment, not that that matter in context.  There were, of course, only 48 states at the time.

Section 1. After one year from the ratification of this article the manufacture, sale, or transportation of intoxicating liquors within, the importation thereof into, or the exportation thereof from the United States and all the territory subject to the jurisdiction thereof for beverage purposes is hereby prohibited.
Section 2. The Congress and the several States shall have concurrent power to enforce this article by appropriate legislation.
Section 3. This article shall be inoperative unless it shall have been ratified as an amendment to the Constitution by the legislatures of the several States, as provided in the Constitution, within seven years from the date of the submission hereof to the States by the Congress.

While the intent of the Amendment was clear; "bone dry prohibition", it didn't actually provide any definitions and so it required legislation to make it effective, which was quick in coming.

As this list should indicate, Prohibition was actually massively popular in the United States including the Western United States.  Only two states refused to ratify the proposed amendment.  I'm not sure what the situation was in Connecticut, but Rhode Island was heavily Catholic with a large Italian demographic and likely found the proposal abhorrent for that reason.  Still, it's somewhat telling that Wyoming's ratification came with a slate of late Western states that voted for it.  Still, the entire process really only took one year once Congress had passed it.

Everyone is well aware of how the history of Prohibition worked and its generally regarded as a failure.  Like most popular history, it's become mythologized, which isn't a bad thing in and of itself as myths are the means by which humans originally remembered their history.  However, like other instances in which an event quickly turned into an unacceptable defeat, the myth isn't completely accurate.  The popular myth is that Prohibition was unpopular from the start and is a failed example of legislating morality.  While it may be an example of such a failure, it very clearly wasn't unpopular at first and in fact the opposite was very much the case.  Indeed, as late as the election of 1922 it remained so popular in Wyoming that William B. Ross, the Democrat who ran for office, ran on a platform of more strictly enforcing its provisions.

So a person might reasonably ask what happened to cause it to so rapidly fail and to be so inaccurately remembered.  Quite a few things really.

For one thing, the final push to pass Prohibition came in the context of World War One.  While momentum to pass it had been building for well over a decade, the war caused an enormous fear that American youth would be exposed to the corrupting influences of European culture.  If that seems really odd, and it is, we have to keep in mind that American culture in the 1910s remained predominantly Protestant in outlook (and indeed it still is).  English speaking Protestants took a distinctively different view of drink in this period than their Catholic fellows, in part because their history with it was considerably different.  While early Protestants had not been opposed to drink at all, this had evolved and by this point there was a strong anti drinking culture in the English speaking world.  People feared that progress on the anti drinking front would be lost when young Americans were exposed to French wine and, frankly, French women.

But for the most part the cultural impact on Americans, who were not in the war long, was much less than it would be for later wars, even where they fought overseas.  So this fear did not really last that long.  The short but deep depression that followed the war, moreover, reminded people that alcohol was an agricultural byproduct, and like a lot of things that impact a person's wallet, that had an influence.  The lid coming off of the culture in the 1920s had an additional big impact on things as the 1920s started to Roar and Prohibition became fashionable to flaunt.  That in turn inspired criminal activity that became a major problem.  By the early 1930s Americans had substantially changed their minds as a second depression, the Great Depression, again depressed the agricultural sector along with every other.  So, after a short stint, Prohibition went from massively popular to substantially unpopular, and the 18th Amendment was repealed. 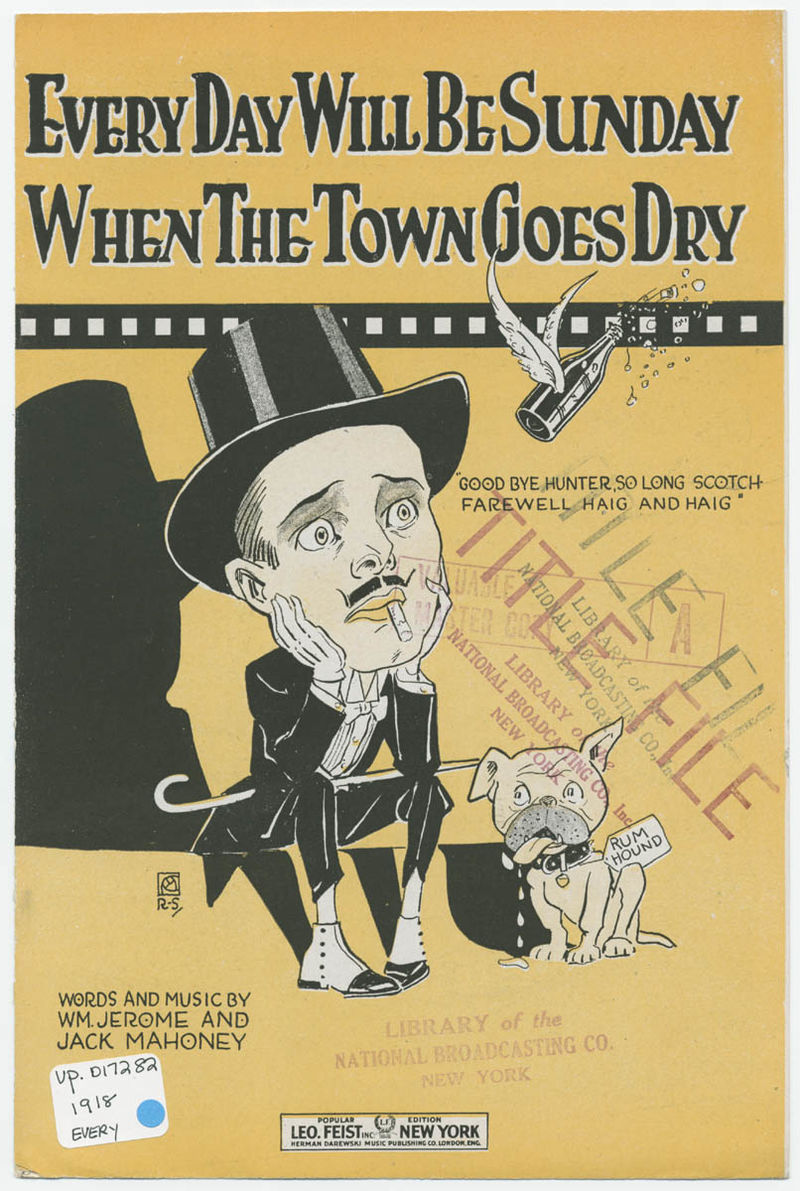 I enjoyed learning more about the history and background of the 18th amendment. I find it fascinating how public opinion strongly supported it in 1919, yet the sentiments quickly changed after it was implemented.

I've found over the years that the story of Prohibition is remembered almost entirely inaccurately. It was a hugely popular movement before it became the law, and it was a public health success. That's hardly recalled at all.

Indeed, nobody ever seems to be willing to explain how it became the topic of an amendment to the Constitution, which isn't easy to do, if it was so unpopular.