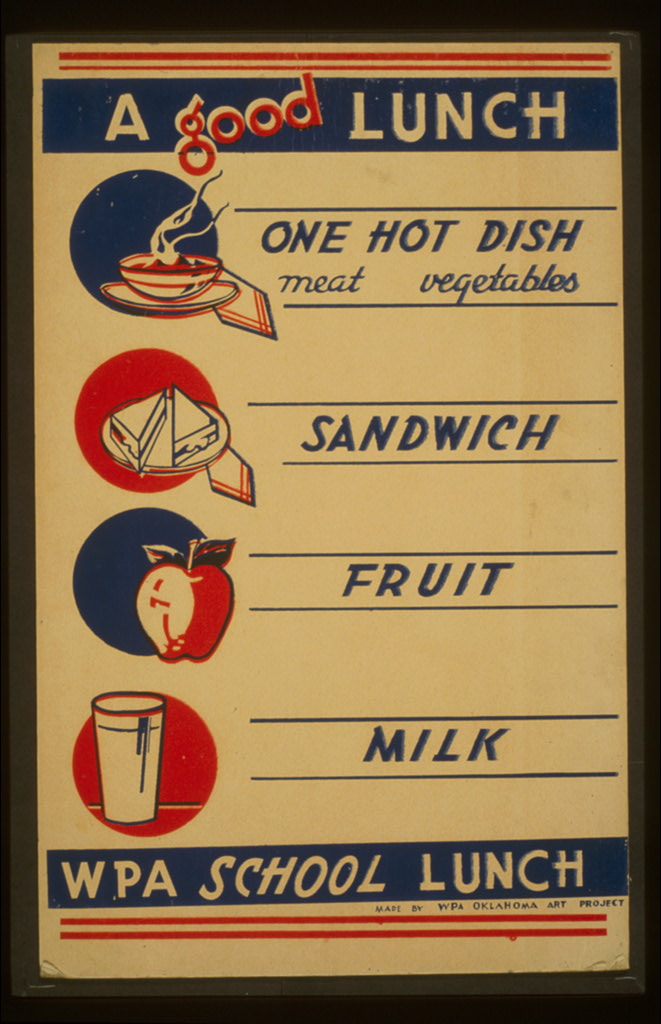 
And big lunches too. 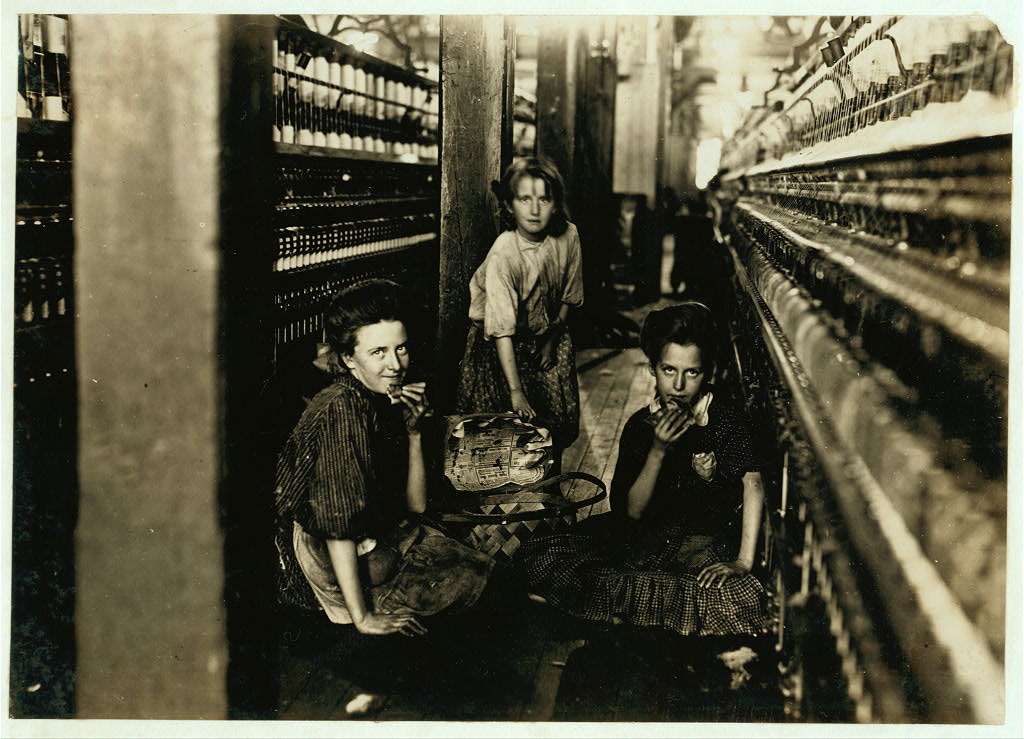 Child workers on their lunch break, December 1908.  None of these girls look like they every got enough to eat.

Lunch is an odd meal in the U.S.  Most of us eat our largest meal in the evenings.  I'm not sure when that became the norm, but its the norm for almost everyone I know.  The only exceptions are some working rural families that routinely have large noon meals and small evening ones.  In town, I don't currently know of any exceptions.

The suggested packed lunches from 1919 are so big that they'd frankly do me in for the rest of the day.  Anymore, as I normally skip lunch, and frequently breakfast as well, just about any lunch tends to do that.  But these suggestions were directed at the worker of 1919, who still normally worked a pretty manually intensive job and who almost certainly walked a fair distance, normally, to get to work. 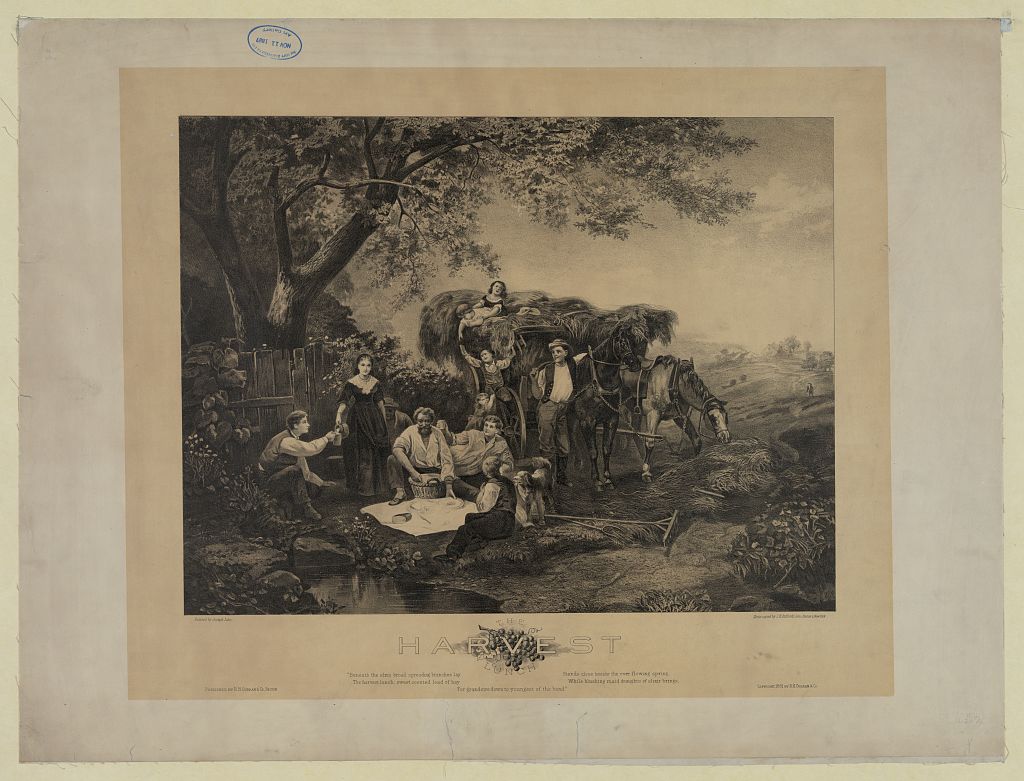 Indeed, I've often thought about that in the context of the city in which I live.  I can see in photos of the town of this era cars were becoming a really big thing, and the downtown was normally packed during the daylight hours with them.  But I'll bet that most men still walked to work at that time.  Indeed, I know that driving to work was sufficiently uncommon as late as the 1940s such that the town, which was less than 1/3d its current size, had a bus service. 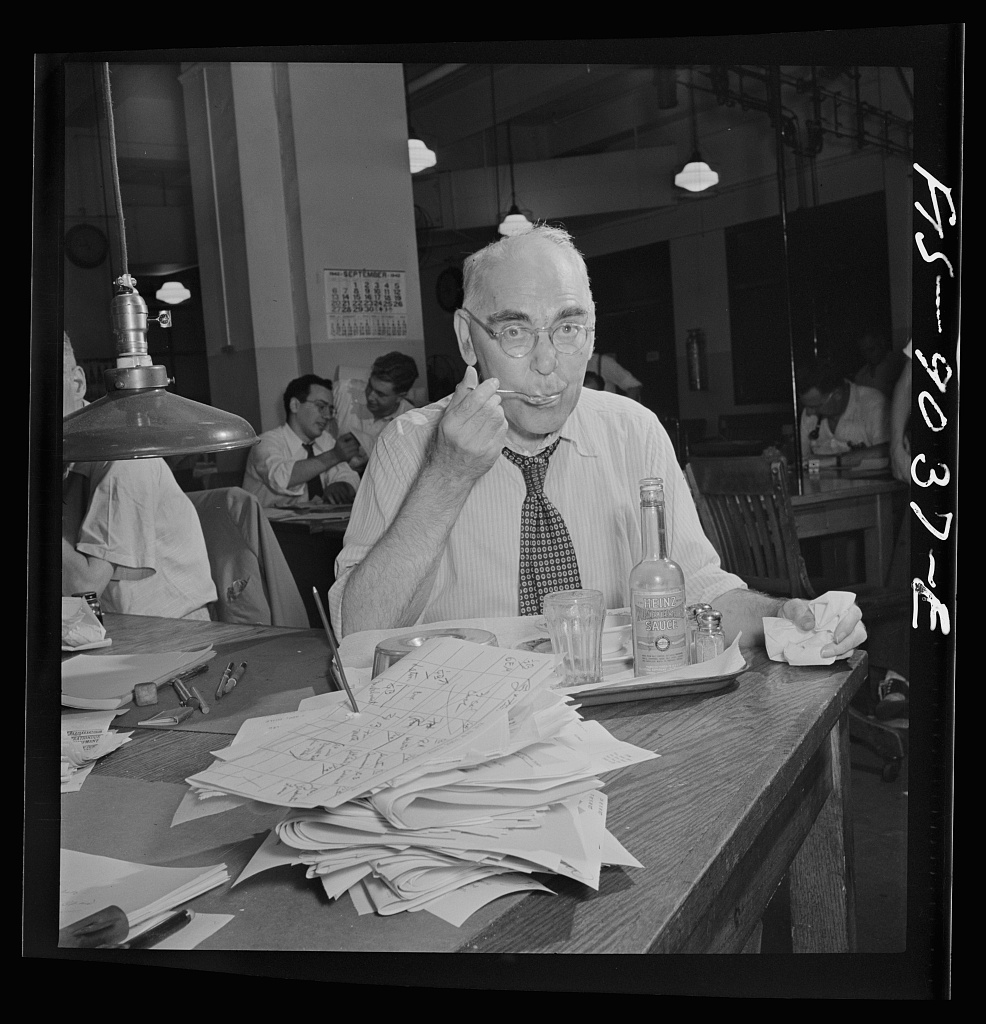 Anyhow, as I usually don't eat lunch, lunch habits of folks are something I'm curiously aware of, as eating lunch is the norm, at least among the people I know and interact with daily.

I was already in the habit of skipping lunches when I was in my 20s, and when I first went to work both my father and a co worker warned me not to work through lunch but to take a break.  That was solid advice.  A break in the middle of the day is indeed a good thing.  My father always ate at a cafe downtown at noon with his friends every work day.  I sometimes started eating downtown but more often than not went home and ate lunch.  I was very thin at the time, but the sedentary nature of my day job combined eating a lot more than I was accustomed to cured that over time.  I'm not fat now, but I'm not anywhere thin as I once was.  As time went on and work became heavier, I started omitting lunches again and now I very rarely eat them. 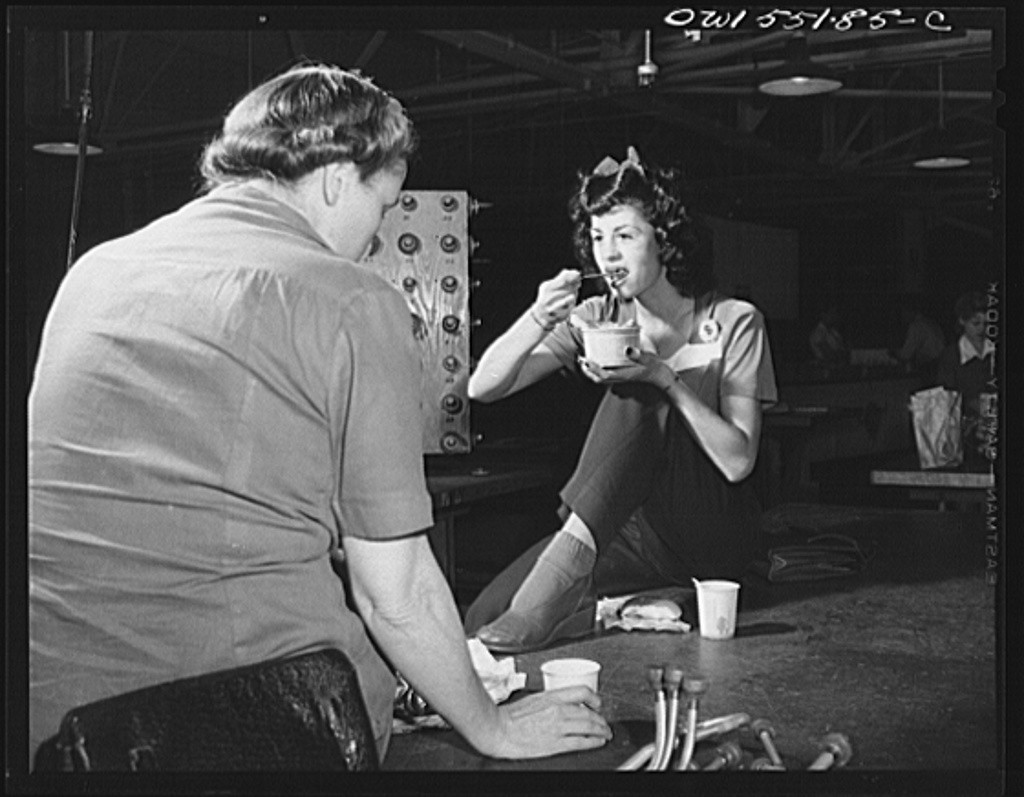 This isn't the case for other people, and people's lunch habits are really varied.  Most people I know eat a fairly light lunch every day.  Some of those lunches feature things I'd never eat, like sardines.  One fellow I know who is on one of the currently faddish diets and who is concerned about his weight, for good reason, eats an absolutely giant lunch every day, usually made up of leftovers from the prior nights dinner, an eating habit that probably has more to do with his problem than anything else.  I'm sometimes tempted to tell him to drop the diet and skip the lunches, but that would likely be regarded as rude so I haven't. 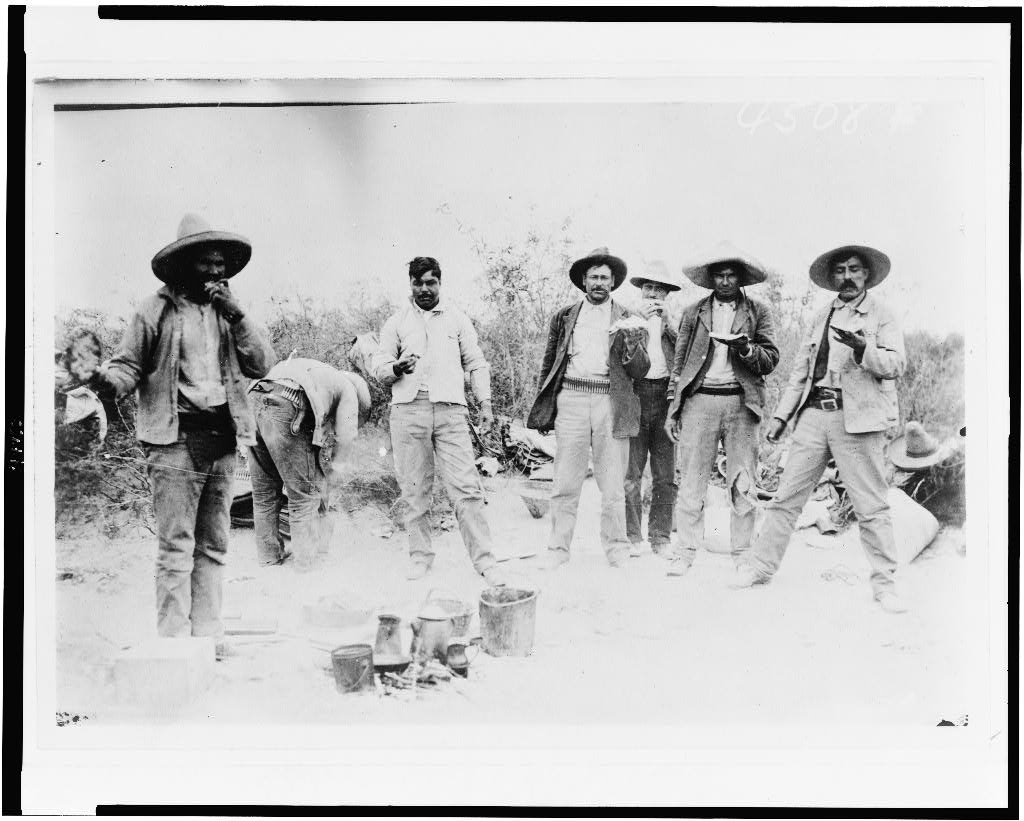 Skipping lunch, I find, really bothers some people intensely.  That is, not their skipping it, but other people skipping it.  They don't like that you do it and it worries them.  I'm routinely warned by a very thin coworker that I need to eat lunch. She does, every day, and is much thinner than I am, who does not.  I'm sure that she in fact really does need to eat lunch every day. 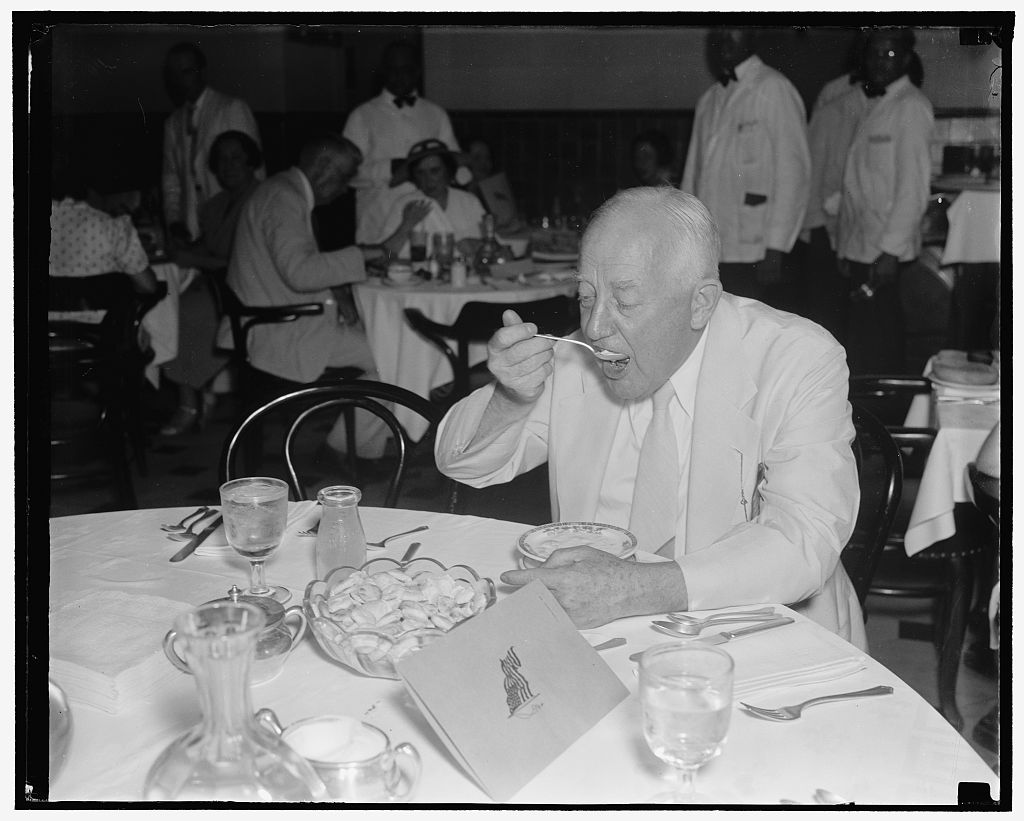 Which gets to metabolisms, I guess.  Some folks seemingly have high metabolisms and others low.  In prior eras, those with law metabolisms were probably the people who survived famines.  Folks who can eat three giant meals a day and not gain weight, and there are people like that, probably died.

I'm somewhere in between, I suspect.  If I skip breakfast and lunch and don't over compensate at dinner, I'll loose weight.  As I never eat a big breakfast anyhow, and usually skip lunch, I won't loose it rapidly, but I'll loose it some.  If I start eating Giganto Breakfast Burritos, or whatever, everyday, I'll gain it pretty quickly.

None of which is dietary advice, I'll note.  I'm not saying that should engaged in what some call Intermittent Fasting, which is basically what this is, accidentally.  For one thing, it could really mess up your blood chemistry quickly.  If you need to loose weight, see a doctor before you do anything.

But I will note that I think nearly every diet fad is just that, and by that I'd include the current popular Keto Diet.  It strikes me as baloney.

Well, anyhow, heavy workers expending a lot of calories.  That was the work of a hundred years ago and back.  They needed a big lunch.
Posted by Pat, Marcus & Alexis at 07:49

It's always fun to see where you go with posts.In additional to what is actually eaten, lunch often has a social context (even it if is just someone telling you not to skip lunch). I really enjoyed seeing the photos of people eating lunch in different time periods.